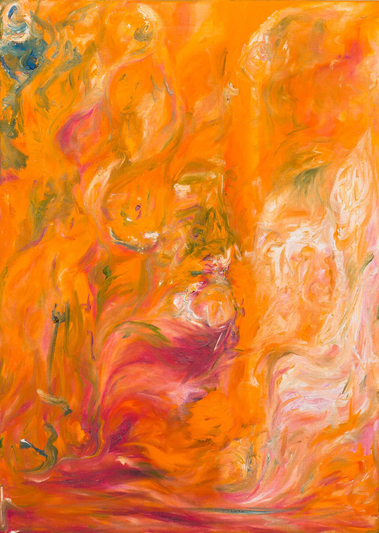 There is some other space in which angels live. At different speeds, with different information, with a different feeling. If this space is not there, then, one way or another, I imagine it - not entirely, because I can't do it like that, but as if I'm peeping through a peephole - it's incredibly interesting. There is also another space in this picture, but such as if combined - as if it is so "angelic", and such as, for example, in the picture "Firefly". And at the head here is the meaning that I still think through my earthly knowledge, whatever one may say, and they are all exposed by signs. An unfamiliar sign that cannot be deciphered is meaningless. And some kind of meaning without signs is, in fact, also meaningless. Memory does not hold it - this meaning, because there is still no one to transfer it to, because there is no symbolic resource for that.

This canvas, when it was still empty, visited the summit of more than 4500 meters above sea level, almost at the top of Elbrus. Of course, I was afraid to go to the very top without ammunition. Initially, we thought that somewhere at the top I would paint. But it was not there! It's cold, nevertheless, because of that it is not very convenient :) So we charged this canvas with whiteness, purity, and these are the thoughts that I told about, it eventually showed itself. And white light here means wisdom and knowledge.